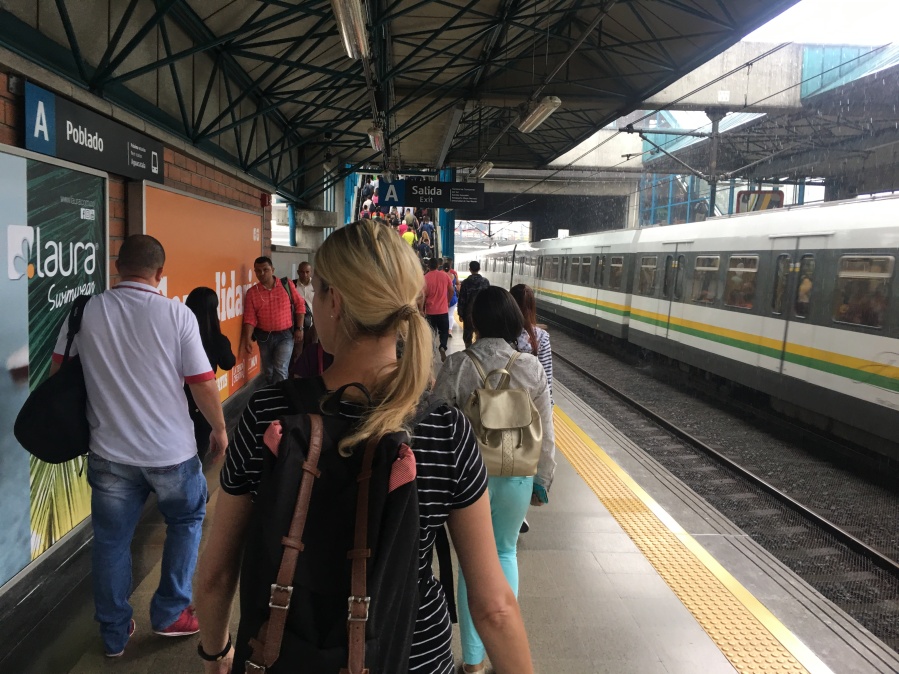 In Medellin we walk!  No cars, no taxi just walk and the metro to get us in and out of our longer walks.  We set our step goal at 12,000 steps per day which is about 5 miles.  What a great work out at any altitude.  Especially this one.  Medellin sits at 1,495 meters which is just under 5,000 feet.  We just stride on by the honking, noise of the motorcycles, trucks and taxis.  Oh, and by the way. Do NOT expect them to stop for you while crossing in a crosswalk.  Caroline jokes that she hears them step on the gas as we cross the streets.

The Metro here in Medellin is beautiful.  Clean, efficient, and safe.  Most of the time.  We use the metro to get north and south in the valley.  Last week we ventured to a beautiful little neighborhood called Envigado just south of Medellin.  Fantastic little restaurants and bars and just a bit more peaceful than the bars in Pablado where we live.

We had a nice bottle of Malbec and a beautiful early dinner in Envigado then decided to take the metro back to Pablado at about 6pm.  Rush hour!  Wow!  We had never seen such a thing.  Train after train stuffed like a piñata.

We waited a train or two then pushed our way on board the next train car.  Most people smiled and greeted us with wonder as the two big headed American’s pushed inside the car.  We are as tight as possible with zero personal space. Pressed body to body, skin to skin and breath to breath and not with each other.

We were only two stops away.  We can do this!  Caroline and I have our eyes locked on each other.  First stop, a rush of people move to get out of the train and another push their way in to the train both trying to beat the closing of the door.  Crammed inside the car I shifted my body, and raised an arm to allow a few people to get by.  One young man looked me in the eyes, locked my eyes actually and started speaking to me in Spanish. Next I felt his hand pawing my front pocket going for my phone and wallet.  I slammed my arm down and let out a strange yelp while locking my hand on top of both. He continued his eye contact while he exited the train empty handed.  The compressed air whoosh sound of the doors closing sound like my own sigh of relief.  Next stop is home! The doors whoosh again to open as we wiggle and slide to beat the doors closing.  The car with all the people feel like a finger and thumb squeezing a pea pod.  Finally we are spit from the train like two peas.

Caroline asked; “What was that?”  As I told her the story we move through the train station quickly and cautiously, as one, continuing to be carried by a sea of people going home after work.  Good people!  Real people!  People of Medellin. 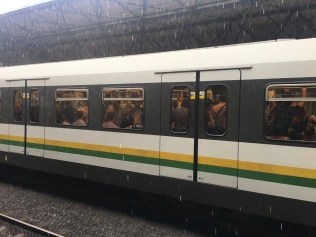 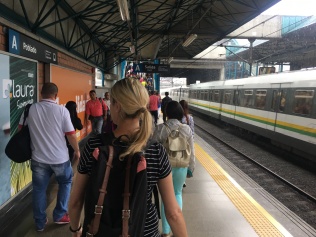 Take the metro!  Although, we suggest staying off at rush hour.

Just like most places in the world 99% of the people are helpful, kind and genuinely curious.  We love interacting and doing our best to speak their language.  Spanish is so important and we are thrilled to be learning new skills everyday.

More to come from Colombia!

5 thoughts on “Medellin-Steps-The Metro and the Pick Pocket”

We are traveling and living in San Miguel de Allende right now.  Our next stops in 2019 include: