The phone rings. The shoot is on!  The call is from my good friend and journalist John Larson.  We are about to take off to shoot a story on the Baja Peninsula in Mexico.  John is in San Diego and we live in Mexico.  We can meet him on the Baja.  I haven’t shot a story in 23 years.  My last story was with John and it was the Clinton inauguration day storm in Seattle.  The gear is different, the editing is different and the world is different.

Before I left Seattle I invested in equipment that I could use to gather broadcast quality video.  My Canon 70D is an amazing camera.  I do question my skills or lack of skills.  John and Caroline both encourage me to go for it!  I’ve been practicing knowing this could happen but can I hold up my end?

We fly to Tijuana and rent a car to drive the 4+ hour drive across the Baja.  John enters Mexico through Mexicali for his 4+ hour drive south to San Filipe.  John is in his brand new Chevy Bolt, an electric car with 250 miles of range.  His trip is 243 miles one way so he will have to depend on newly installed charging stations in Mexico to ensure arrival and return.  Stressful but the chargers work and it is reported to John that he is the first user of these chargers in Mexico.

The Vaquita is a small Porpoise about five feet long.  They are elusive and stay to themselves and don’t travel in pods.  This particular species of Porpoise only lives in the Sea of Cortez.

They once thrived in these waters here and loved the silty sediment from the Colorado River that empties into the Sea of Cortez.  The Sea of Cortez once rich with fish has been over fished, illegally fished and now is nearly empty of fish.  As the traditional fish disappear the community of San Filipe struggles to replace fishing as the driving force of the economy.

Another fish barely in existence and also illegal is the Totoaba.  Totoaba is a large fish also limited in numbers but rich as a black market commodity in China.

The Chinese believe the swim bladder of this fish cures many ills and makes a better person.  Think about the Black Rhino tusk or Shark Fin.  The swim bladder sells for $50,000 per kilo in China.  This is a richer black market than cocaine in Mexico.

The fishermen of San Filipe have a way to feed their families.  Gill nets have been banned by the Mexican government for over two years.  Family is more important.  Fisherman fish and this fish will feed a family for over a year.

Nets no longer need to be buoyed by floats.  Fishermen attach a GPS to the net and sink it below the surface undetectable by the Mexican Navy.  Under the cover of darkness they gather their nets to catch the Totoaba along with possibly the smallest mammal on the planet.  The Vaquita needs air to breath.  When they are caught in nets they drown.  Collateral damage from the Chinese black market. 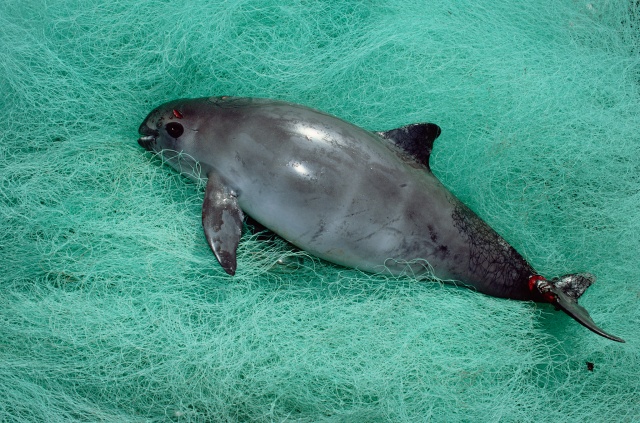 At the time of this story there are only an estimated 30 Vaquita left on the planet.  Scientists also estimate that we lose 19 Vaquita per year for the past five years to illegal gill netting.  This gives the species of the Vaquita not more than two years survival on our planet.

Scientists from all over the world came together in Mexico to help and plan a strategy to save the Vaquita.  The best marine biologists and veterinarians in the world gather in San Filipe.  The Mexican Navy, the US Navy Dolphin team, Carlos Slim and Leonardo DiCaprio all gather in Mexico with money and experience to try and make a difference, to try and save a species.

Operation Vaquita CPR is in full motion for the month of October.  https://www.vaquitacpr.org/

The plan is to capture as many of the Vaquita as they can and keep them in a large sea pen in their own waters.  The sea pen will keep them safe while the Mexican Navy cleans up the massive amounts of illegal gill nets in the Sea of Cortez.

The team catches a juvenile Vaquita early in the month and release it because it doesn’t react well to the capture.

On Sunday November 5th we arrive in San Filipe and the team captures the first adult Vaquita.  Scientists report the mature female responded as they expected during the capture.  Once they transferred the Vaquita to the sea pen she went crazy, swimming fast and banging the nets of the sea pen.  The team scrambled to get her free but she died upon release.  She died from the stress of captivity.

Scientists and veterinarians were visibly shaken on shore as they told the story.  All efforts to capture the Vaquita have now been halted and without something drastic happening with the culture of some fishermen and the black market in China the Vaquita will be extinct.

“Vaquita conservation is part of the President’s agenda and will remain a top priority ” said Mexico’s Minister of the Environment Rafael Pacchiano Alamán in an interview yesterday.

Please think positive thoughts that something can be done to save a species on the earth we inhabit and should be able to protect.

5 thoughts on “A return to Journalism-A Story of Survival.”

We are traveling and living in San Miguel de Allende right now.  Our next stops in 2019 include: