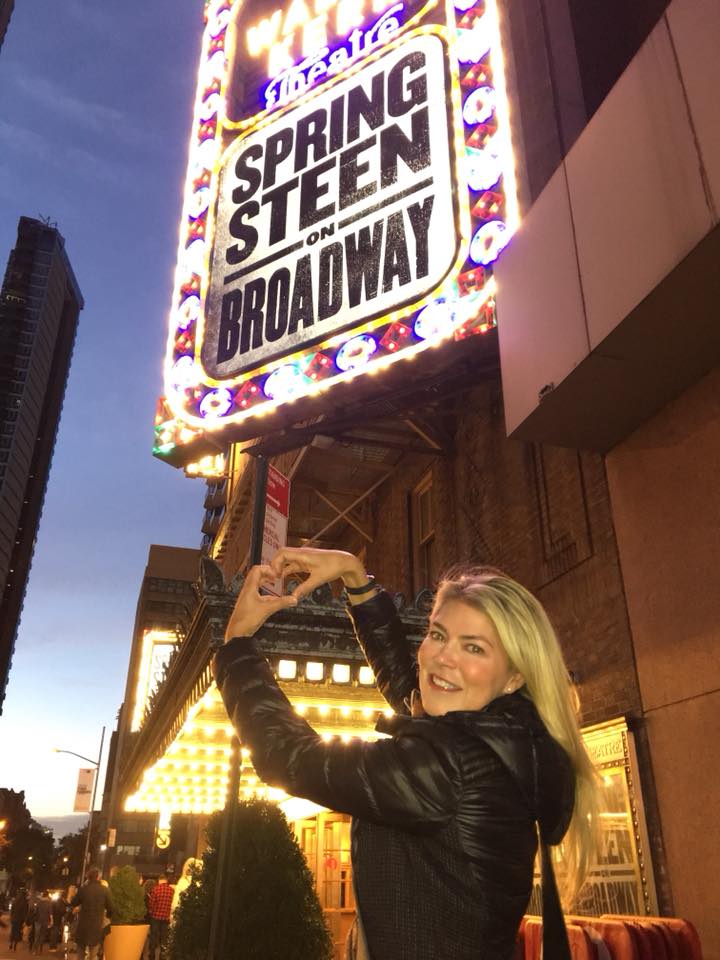 We arrive early to see the Walter Kerr Theater marquee board, find our seats and have a drink. 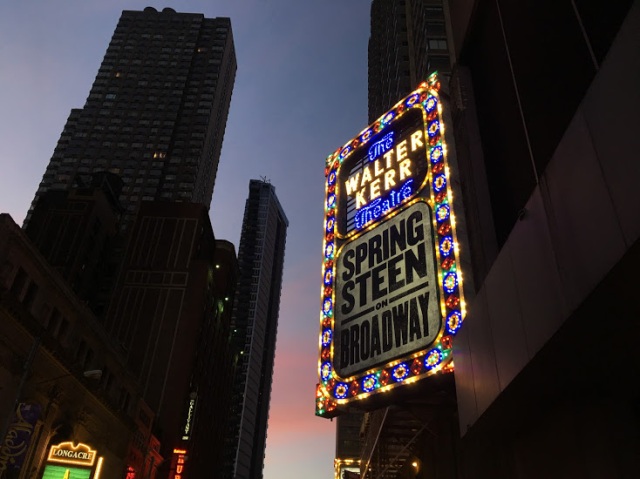 As seats fill up the excitement builds.  Kevin Bacon walks by with Kiera Sedgwick.  Danny DeVito is said to be in the house.  Then in walks Sir Paul McCartney.  The only star of this theater however is Bruce Springsteen.

We have been warned to bring tissue. The lights dim and Bruce Springsteen walks calmly to center stage, grabs one of his beautiful guitars and begins talking.  Actually he is speaking in poetry about his life, his family, his friends and his fans.  Bruce paints a picture of New Jersey where his family and extended family lived in the 50’s and 60’s as he speaks you can almost hear the church bells ring.  He strums his guitar and slides right in to Growin Up.  Caroline thinks about her family.  I think about my family and how we grew up.  Bruce explains that music reminds us about our own lives.  Boy does it and the tears flow.

He jokes about being Mr. Born To Run and now he lives just five miles from his hometown.  A perfect transition into My Hometown which he sings with perfect clarity and melody and harmony with his guitar.

My Father’s House is about his Dad and he tells a story about being sent into a Jersey bar to tell his Father that his Mom wants him to come home.

My daughter Alexa asked me the night before the show if I had to choose would I choose Thunder Road or Rosalita as my favorite Bruce song.  The answer this night is Thunder Road.  “The screen door slams, Mary’s dress waves. Like a vision she dances across the porch as the radio plays.”  Tears flow and you hear other people crying around you.  The sound of sniffles continues through this beautiful show.

Tenth Avenue Freeze Out is a song designed to rock our world.  Bruce weaves in stories about Clarence Clemons and their strong friendship and his band.  When one plus one equals three you know you have the right band.  He is shaken by the loss of his friend Clarence and other friends and family.  We are shaken to more tears as Caroline thinks of the loss of her brother Shon and the impact it had on her, her sister Rachel, her Mom and her Dad.  I think of the loss of Kathi, my own children Alexa and Andrea as well and my parents as they struggle with health issues.  The story ends on a high note as he transitions to the song describing how Scooter and the Big Man busted the city in half.

This is not your jump up and down screaming rock concert.  This is a rock star reflecting on his life and baring his soul to his extreme fan base.  Yes, this base is extreme.  Tickets are expensive and hard to come by with only 900 seats each night.  Bruce talks about how his songs are about the working class and how he himself has never worked an eight hour day, or worked five days a week.  Then with a smile he says…Until now.

The beautiful Patti Scialfa, Bruce’s wife and savior, enters the stage for two songs.  Tougher than the Rest and Brilliant Disguise.  They clearly are in love as she stands next to him and they sing mouth to mouth on one microphone.  Her voice is light, airy and spectacular.

Dancing in the Dark is written with Bruce’s mother in mind.  He talked about when things got bad his mom would say: “Now it’s time to dance.” Bruce loves his mother and it is clear from the passion of his words and memories.

As political as Mr. Springsteen can be or could be he only talked about what is going on in our country as a bad chapter, a chapter that will only continue to make our country great.  Land of Hope and Dreams is his song to America and his love of the United State of America.

Two hours later the show comes to the song that made Bruce Springsteen famous. Born to Run is his theme song and he does not disappoint.  His voice is clear and the guitar cords are crisp and perfect.

As he says goodbye Patti joins him on stage and they bow together hand in hand.  Bruce looks at the crowd, looks at the faces.  He may have given a nod to Paul McCartney but as his fans stand he looks at us with his sad and understanding eyes.  As he leaves stage he waves a heavy rock star wave.  I hope this is not the last time I see him on stage.  Bruce has given so much and he has more to give.  Listen, learn and love.  Spoiler Alert below:

Tougher Than the Rest

Dancing In the Dark

Land of Hope and Dreams

“Tramps like us, baby we were born to run!”

2 thoughts on “The Boss on Broadway”

We are living full time in San Miguel de Allende in Mexico. In 2023 we will be searching for Bruce Springsteen somewhere in the world.